The Most Change – Jason McNamee, Civilian 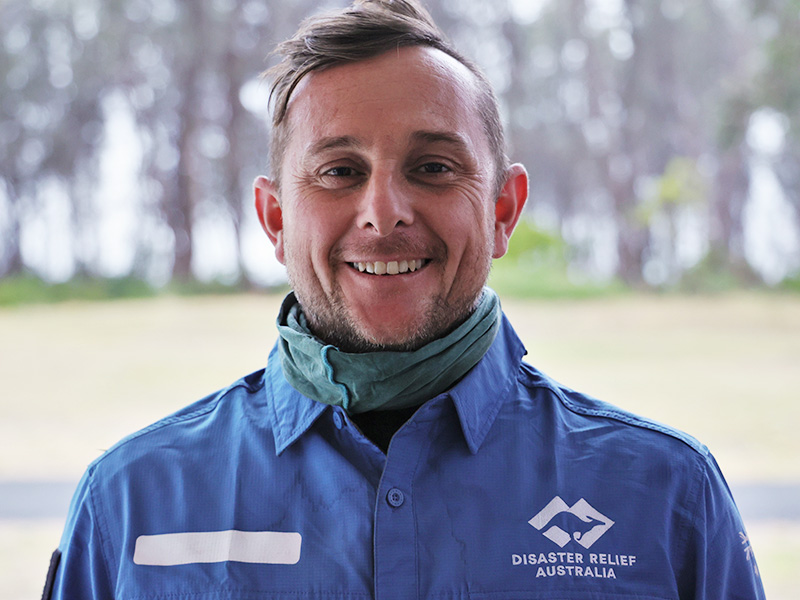 I joined DRA after the floods in NSW. I saw on LinkedIn what DRA was doing after the immediate fanfare and the media had left. I found the cleanup and how DRA aids in that recovery process really interesting. Seeing the little snapshots of what’s happening and what’s really going on motivated me.

You don’t realise, or you forget, that there’s still a lot of people out there doing really good work, doing the hard work. There are people there just to help in long-term recovery.  I thought it was really amazing that DRA were still out there when the spotlight’s gone. That’s a true sign of giving these people the help they really need.

This is my first operation and it’s been fantastic! The hospitality has been second to none and I’ve got to say, it’s not what I expected at all. I thought it would be camp beds or blankets on the floor, everyone lining up for dinner – that type of camp feel, which is fine, I was prepared for that. I guess what drove that thought was the military aspect, which really interested me. But to come here and see how it’s been organised is great.

I’m in construction but I’ve now learned new skills and used tools I’ve never come across in my life. I’ve seen brush cutters and chain saws. It’s been amazing, to be honest.

I’ve been moved by witnessing the impact on owners, 18 months after the disaster has taken place. It’s been a hell of a long ride for them financially, emotionally and God knows what else. To actually see that in the flesh is pretty confronting but at the same time, super important and super rewarding.

Everyone’s been really nice to me, it’s been awesome. It’s great to see people of varying ages just really getting stuck in, I mean really stuck in, not shying away from crappy jobs. Everyone helping each other just do what they can, that’s just great. The highlight for me has been the cathartic aspect of seeing these people in their natural environment, how resilient they are, how resourceful. This is what the media should be focusing on. This is the real stuff.

Yesterday we cleared some grass and black wattle from between posts along a fence line so the homeowner can put her fence back up. She was overwhelmed at the fact we had done that for her. These people don’t want handouts, they just want a bit of a hand and DRA giving that little bit of help is just huge.

If you want to see the real effect, you can have on people’s lives become a member of DRA because it’s that true experience. This is where it’s at, where you can affect the most change.