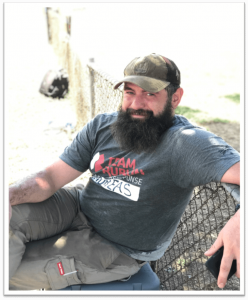 I joined the Army at 18 where I went to the Australian Defence Force Academy and studied a Bachelor of Arts (History) and Geography. After completing my time at ADFA, I moved on to and successfully completed at the Royal Military College, Duntroon. Upon graduating from RMC I was posted as a Platoon Commander in 5 The Royal Australian Regiment, in Darwin, Northern Territory.

In 2014, I left the Army at the rank of Captain where I somehow found myself in sales, then in 2017 I took a year off work and I walked the Appalachian Trail. I had completed 1,700km of the trail before injury set in so I stopped. I then went to Spain and walked 780km of the Camino Santiago. During my walks I met a lot of ex-Marine Corp soldiers who talked a lot about Team Rubicon-USA and what they do on a deployment.

I returned to Australia and saw Team Rubicon Australia (now DRA) on my Facebook, so I submitted an expression of interest. My gap year really gave me perspective about who I am and my future. I thought TRA could be something I would really enjoy. I am on my first deployment and its hot, its sweaty but its honest work. Its good to be with ex AJ’s who talk the talk and have a laugh together while working hard together.

Working on deployment in difficult conditions leaves me feeling neutral, like a baggy arse digger with no decision-making responsibilities. By the end of the day, I feel like I’ve put in and worked hard as part of a cohesive group. It’s like having a purpose and direction again while having a laugh.