Brendan Clarke and his wife Deb are one of the few District Coast locals who lost everything, including their home in the Deepwater Bushfires that swept through the region in late 2018, early 2019.

They had initially stayed to protect their property and thinking it was safe had left to seek updates from the local fire station. Unfortunately it was during this time that a small spot fire started. This was all it took to burn down their home, water tanks, sheds and fencing. Thankfully their cattle survived the fires as the grass had been grazed low.

When it first happened, in the days that followed and the shock subsided there were a lot of initial offers of help from the local council, to the salvation and then a few months later, Lifeline. Brendan has nothing but praise for the staff at Lifeline who have been a big help to him and his wife, and now he has the same level of praise for DRA as our members as part of Operation Dexter, Wave 3.

Our DRTs have helped him move a new water tank into place and shift some wood to make room for finishing off renovations on the old house he had trucked in to be restored, placed in the location where their old house once stood. 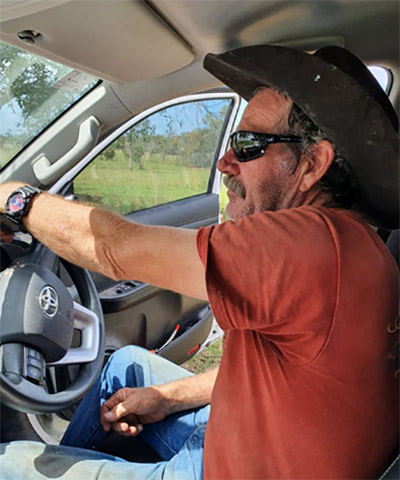 Brendan Clarke and wife Deb lost everything in the Deepwater Bushfires of 18/19. DRA came to help out  during Operation Dexter. We were grateful to record his story.

It’s been slow going for Brendan and Deb. They unfortunately were not insured so it has been a long time waiting for some bushfire relief funding courtesy of the Salvation Army, used to buy their replacement home which arrived late August this year. Still with no electricity or running water it is still a rough journey ahead for the Clarkes. But in true Australian country style, they are both happy to still have something to call home. Even if they still have a way to go before it’s back to a place where they once were, pre bushfires.