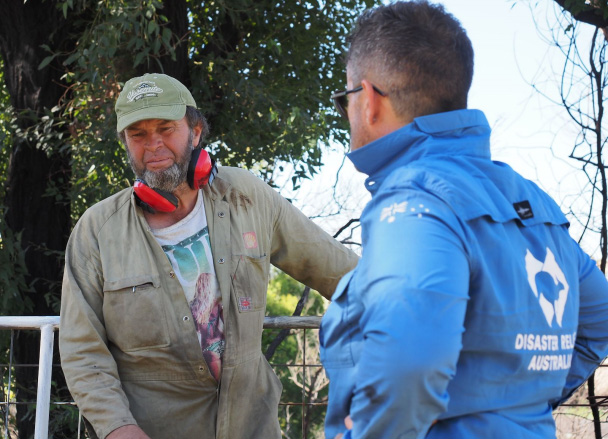 My father bought the Malula Bay property in 1976. He was in the Austrian Navy but has since passed. He was brought up in Pula which is a seafront city on the tip of Croatia’s Istrian Peninusla.

In 1979, my father planted several pine trees along the driveway to the house. He thought they would be great to climb on. During the fires, these trees were burnt out. I was hoping that they would recover, but sadly that wasn’t the case. Today the DRA team had to remove all ten of them.

I was married but am since separated. I have five adult children and one grandchild. I live alone on my property.

In February last year. I was at home listening to the ABC news updates of the fire. I got the message to evacuate and went across the road where I could take refuge on a small island. After the fire had burned through a couple of hours later, I came back to discover I had lost everything. My home, machinery, car, motorbike and my daughter’s car. I’m not insured.

I stayed in a Cabin at Batemans Bay for a couple of days and then slept on some Church pews. I was lucky to get spiritual support from the local Church. They have really encouraged me to ‘hang in there’. I’m now living in a shed on the property.

I was so sad when the fires took away a Wallaby that used to come drink at a water hole on my property. The black cockatoos that used to eat the pine cones from my pine trees have not returned either. I feel a bit more hopeful now. I’ve seen a new species of eel in the watering hole, there are new plants growing and two large sea eagles have come back to the dead trees. I’ve been feeding cheap eggs to a goanna.

I first found out about DRA through the Disaster Relief Centre at the Eurobodalla Council. After DRA has been able to cut down the dead trees, I think I can now move on and start trying to get the property back to the way it was before.

I wasn’t sure about DRA when they first approached me, but now I realise it’s been good to share my story.