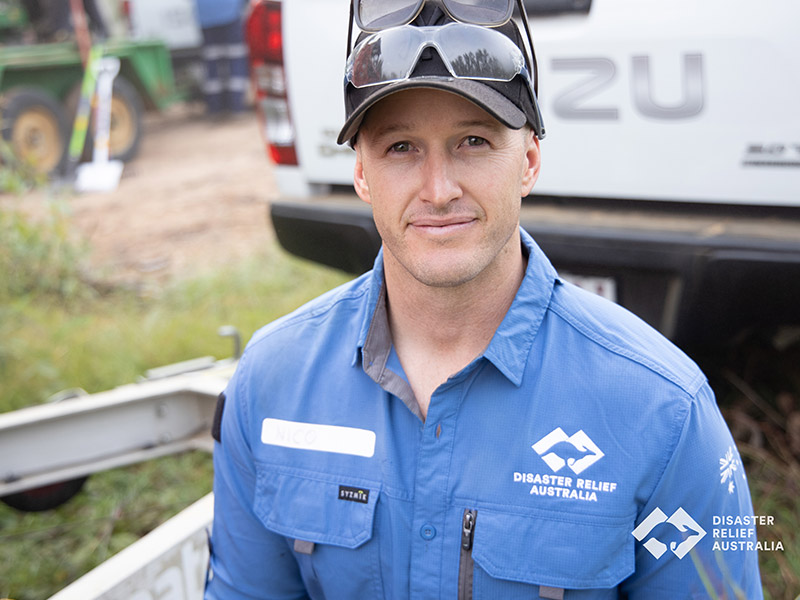 My name is David Nicolson or better known as “Nico”. This is my first deployment after joining DRA only 6 weeks ago. I live in Canberra with my partner, Amber, and have 5 dogs! (2 x Border Collies, 1 x Kelpie, 1 x Ridgeback and 1 x Shar Pei Pitbull)

When I was younger I wanted to join the military and my mate convinced me to try the Navy. I thought I would try it for 4 years and then maybe join the army. I had a good time on the patrol boats but after 4.5 years made the switch to the army for another 8 years. I served as a Trooper with B Squadron 3rd/4th Cavalry Regiment, within the 3rd Brigade in Townsville Queensland.

I loved everything about the military, especially the mateship and friendships during deployments and field exercises. My plan was for it to be my career for life. In Afghanistan I worked in the lead vehicle which always had an explosives detection dog (EDD) as part of the team. One of those dogs called “Flojo” had a very special place in my life and she features as one of nine tattoos on my right arm. My tattoos are a tribute to some painful and also joyful experiences. The Soldiers’ Cross and the Ace of Spades tattoos represent loss and luck, while the words “Mirabad Valley” are where most of my service happened. My tattoos have been featured in a special photographic history at the Australian Museum.

I was injured by multiple improvised explosive device explosions and despite many requests and reports was forced to resign my service in early 2018 as a result of my injuries. This was a tough time but I kept a positive attitude. It’s really important not to hide behind a mask.You can fall into a dark hole and think there’s no way out. When you get so deep it will not only affect you, but your love life, family and friends too.

The hardest part of PTSD isn’t how you got it, or even how you try to hide it – it’s when you ask for help. Asking for help is scary. You may feel weak – but trust me when I say, take the mask off, ask for help, speak to your loved ones and family about it and prepare for the weight to be lifted off your shoulders. If you reach out, you’ll find your brothers and sisters are there for you.

When I left the army I wanted to work with animals and found a job at the Canberra Zoo before my current job working as a dog handler with a company known as K9 Culture. I still knew that there was something big missing in my life and actually felt a bit “lost”. When I was in Townsville we had always helped out with the cyclones and I was really missing that feeling of doing something as a team with the community.

I had heard about DRA a few years ago but didn’t follow it through, and just a few months ago I saw a post on Instagram and investigated further. I rang and pestered the team to tell me everything I needed to know to join and start as soon as possible! That was 6 weeks ago and here I am at Operation Corkhill on my first deployment!

In just a few days I’m back working side by side with other military and ex military and emergency services men and women. It feels similar and familiar. I’m already interested in exploring some things I can do with DRA. I like being on the tools but I also want to find out more about the IMT roles. Although I’ve never met any of the people that I’ve deployed with, we’re already feeling like old friends!