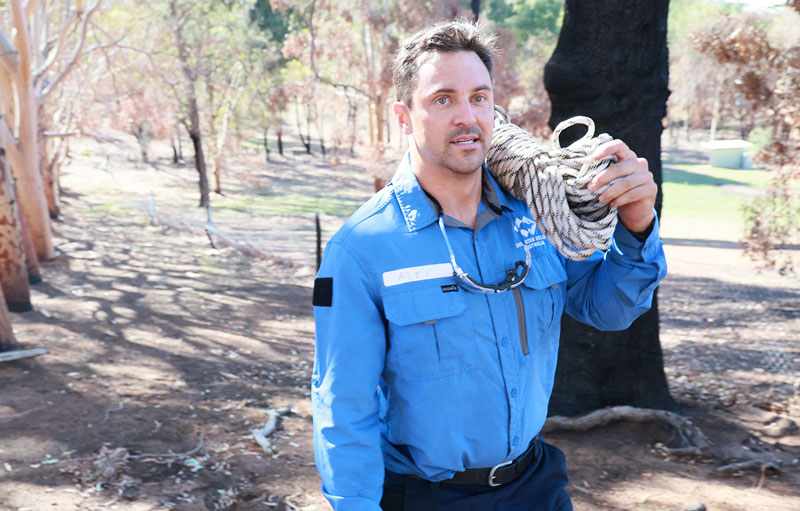 When recognising those members who continually go above and beyond for those needing a hand, the name of volunteer leader Alex Drew comes strongly to mind.

Alex first came on our radar when he applied for a mobilisation role in 2020. He was initially assigned to MEL DRT though he resides in WA, and there he immediately got active in the DRT. An ADF veteran, Alex has a background in sports physiotherapy and humanitarian aid, Alex very quickly grasped the responsibilities of the back of house aspects of mobilisation, and when Op Woods spun up in Perth in his home turf earlier this year, Alex was there to assist in the set up from the ORT forward, acting in IMT roles of logs, ops, plans and also mentoring new members into the various tasks of running a full-scale reactive operation in the field.

With the launch of WA DRT off the back of the Op, Alex moved into the WA Mob Coordinator role, and was pivotal in the set up of the membership cell in WA, recruiting and training new leaders into roles within the wider DRT. This ability to adapt to changing needs in leadership roles, saw him working as a National Ops associate and more recently taking point on a community project in the field during Op Thorpe, all while balancing IMT mentoring and bringing new team members along as they found their feet on first-time deployments.

Tenacity, Mateship, and Service are all values Alex shows, and with his clarity of focus, he strives to find ways to keep members engaged, active and leaning forward, bringing those with him along to assist those in need.