Disaster Relief Australia were recently featured in BankSa Foundation’s Focus Magazine. This edition of Focus ‘A year of challenge’ focused on SA’s resilience through bushfires and COVID-19.

If anyone knows what it’s like to be living and working on both sides of the fence in a disaster zone, it’s Disaster Relief Australia’s (DRA) Chief Development Officer, Anastasia Bougesis.

Ms Bougesis is a first responder – a part-time paramedic who sees disaster first-hand. With that in mind, she put her hand up to be part of volunteer disaster relief organisation DRA (formerly Team Rubicon Australia) deploying for her first mission after Cyclone Debbie struck Queensland in 2017. 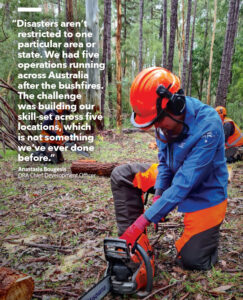 Disaster Relief Australia Chief Development Officer, Anastasia Bougesis, is a first responder in her day job as a paramedic, but also works for the disaster relief volunteer organisation. Despite having lost 40 per cent of the vines on her own property, she stepped up to help in the Adelaide Hills and on Kangaroo Island with DRA.

That role took on extra meaning in January when Ms Bougesis and her husband, Randal Tomich from Tomich Wines, returned from their honeymoon to find 40 per cent of their Woodside vineyard had been burnt a day earlier in the Cudlee Creek fires.

“There were stumps still on fire and trees fell for several weeks and things were smouldering. It was quite stressful. The fire was over but there was a heightened sense it could happen again. There was constant smoke in the air.”

Ms Bougesis was approached to work part-time for DRA in South Australia soon after her first deployment. Being close to home enabled her to step into the recovery efforts earlier this year by organising DRA’s Adelaide Hills and then Kangaroo Island’s reconnaissance missions. Three other teams operated simultaneously in NSW and Victoria.

More than 3000 people have signed up to offer their services since DRA launched in Australia in 2016. Originating in the US in 2010 before expanding to the UK, Norway and Canada, its goal is to improve veterans’ wellbeing by serving communities devastated by natural disasters.

DRA established two teams in South Australia, mostly comprised of skilled volunteers to aid recovery efforts. In the Adelaide Hills, 243 Australian and international volunteers, sponsors and corporate helpers deployed. Another 59 deployed to Kangaroo Island. Both teams wound down in late March due to COVID-19, with a team starting again in the Adelaide Hills in November.

Working in a DRA team is hard yakka. Volunteers and property owners work together to assess what needs to be done, from clean-up operations to clearing burnt grounds of tree stumps and the charred remains of properties and fencing.

“After the fires a team from BankSA also came out, including CEO Nick Reade, and replanted our trees that were burned along the fence line,” Ms Bougesis said. “The hills communities have appreciated DRA’s support.”

BankSA Foundation donated $5,000 towards essentials including equipment, fuel, food and personal protective equipment for volunteers. DRA also received a $42,785 BankSA Foundation Bushfire Assistance Grant in September, to provide further support and return to the Hills community to recommence clean-up efforts. It is easy to forget the devastation now that regeneration has begun, but you need not dig too deep to find community members still needing a hand.