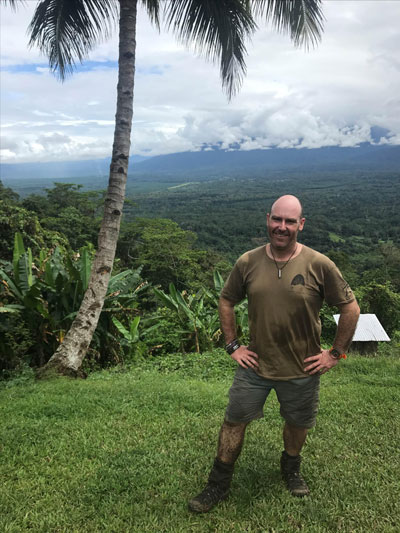 Michael (Mike) Hartas commenced his military career at Duntroon in Canberra in 1996 and graduated in 1998 to the Royal Regiment of Australian Artillery.

Posted to the 1st Field Regiment in Brisbane commanding a Section of Artillery Guns,  Mike settled into Regimental life as a young lieutenant prior to Operation INTERFET in East Timor kicked off in 1999.

Mike, having previously managed a bar prior to joining the Army was deployed initially as a Liaison Officer and then directed to set up canteen and duty free facilities to support the 5000 strong force.

On return to Australia, Mike returned to a Regimental role where he was selected to lead a Transit Security Element as part of Operation Sovereign Borders.

Later in 2001, Mike was deployed to OP BEL ISI II in Bougainville and the Force Protection Commander, where he was responsible for the safety and security of the 250 deployed troops and public servants.

In 2002, Mike was posted to Perth as a Training Officer of a Reserve Unit; however due to the operational tempo at the time he spent a significant amount of time helping train Special Forces in the coordination of joint fires including fast air prior to their deployment to Afghanistan.

In 2005 Mike was posted to Sydney, where he commanded the only parachute deployable Artillery Battery in the ADF, during his time in this role his unit had elements deployed in 4 different theatres and he commanded a small team back into Timor Leste as part of the initial re stabilisation force element.

On return to Australia, Mike undertook a Technical Staff course and became a program manager and Test  Director for Land indirect Fires programs- during which time he introduced a new mortar ammunition and ballistic computer into theatre in 3 months.

In 2010, Mike was posted to the UK as a Test and Evaluation Manager and served as the ADF’s representative to NATO on indirect weapons testing. On return he took up the role as the Senior Proof Officer and Officer Commanding of the Proof and Experimental Establishment at Port Wakefield in South Australia.

In 2013, Mike was medically discharged for medical and psychological injuries sustained during his service.

Since discharge, Mike has worked as a contractor to Defence as a test and evaluation specialist and project manager prior to joining REDARC Defence Systems, a new Small to Medium Level advanced manufacturing business in Adelaide that has diversified from automotive and trucking into the Defence sector. In this role, Mike has established REDARC as a trusted  partner to Defence primes such as BAE, Raytheon and Kongsberg and has grown exports of REDARC products to include support for the UK. US and other defence markets. Mike volunteers for Surf Life Saving SA as part of the Rescue Water Craft Operating Team.