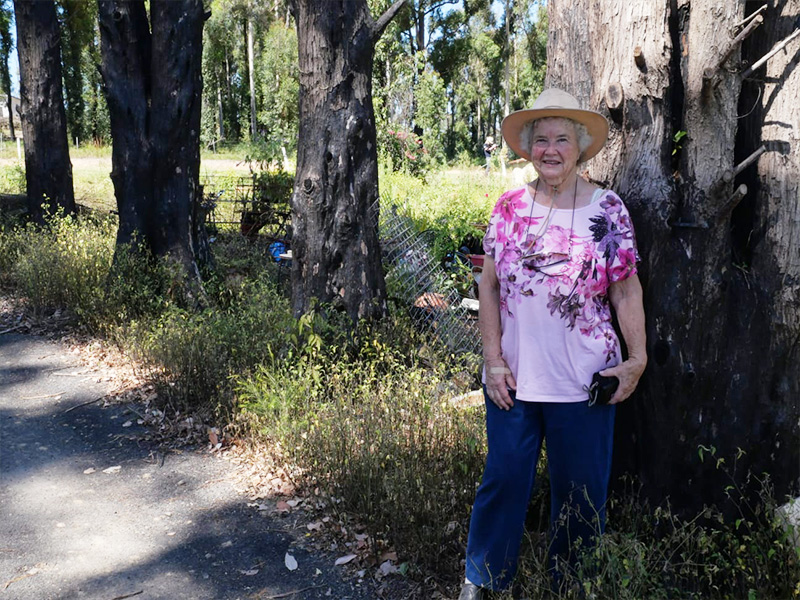 I am 75 and had a knee replacement last year. I live here with my mother who is 96, but she will tell you she is 96 and three quarters as it is her birthday in July! My family, which included me and my two brothers, bought the property and we have lived here for 47 years.

I was a teacher for 36 years and I taught at Batemans Bay Primary School. I have been involved with special needs kids and at the moment I volunteer with the Moruya Historical Society. I help people research their properties and family history. I also did this for myself but I lost it all in the fires. Some people are sending me stuff that I had sent them to try and help me fill in the gaps but the photos are the main things that we have lost.

We had a Hereford Stud here originally and when my father died, I continued on with the help of my mother. Later we stopped using it as a stud but still sold cattle. At the time when the fires came through it was more of a hobby farm by then as it was too much for mum and I to look after. We enjoyed that and so did the kids and great grandkids.

When the fires were coming we could see the smoke in the distance. We started watering the house. We’ve got two water tanks and we had three lots of pumps. My brother and nephews came over to help us. Around 6am I got a phone call with a siren saying ‘get out, get out, head east, there’s no other way out’. So I packed mum into the car and grabbed some washing off the line. We also had some prescriptions and things like that ready at the front door ready to go. We had survived the fires in 1994 and thought the house would be safe this time. We thought we would come home to it but we didn’t.

During the fires we lost half the herd to the fires and the rest that were rounded up had to be put down. The ones that we had left were looked after by our neighbours, even though they lost part of their property. Rotary paid for the feed for them. Someone then offered to buy up what cattle we had left and we said yes. That little money we got definitely helped. I don’t think we will go back to that, but once we get the fence up, we will agist. In the past, we have agisted horses and we have already had a couple of people inquiring about this.

As our property borders Forestry Crown Land and the road, we received money from the Government for the fencing. They paid for the wire and the posts and we have to provide the rest. They have worked out we have 6.4km of fencing. We will do the fencing ourselves but we need someone to put the posts in, that’s what is being done now. So by DRA doing a good job and clearing along the fence line, that is something that we don’t have to do.

Mum and I have been living in Catalina with my brother and sister in law until their house was finished. They got a good start on theirs. The Insurance Company is paying our rent and the landlord is fantastic, we can stay as long as we like.

The frame is up on the new house and they are starting the roof today so it should be finished in time for mum’s 97th Birthday. Mum actually designed the new house. We used to travel a lot around Australia, fishing and collecting fossils and rocks (which all just explode in the fire anyway). We’ve got good memories, no photos but we have the memories. After the fires I thought I’d found a beautiful crystal that I had up in the gazebo but when I tried to pick it up it just shattered in my hand. The only thing that was left was a piece of tinsel and a rubber mat.

During our travels mum had seen lots of Colonial Houses and she really liked them so that is how she designed our house. An Architect friend has done all the work and the house will be level now with wider doors which will make it easier for mum. The house won’t be as big as it originally was as all the family are now married and have kids. Mum loves walking and only uses a stick when she is outside. We love walking on the beach and collecting shells and anything for the granddaughter and great grandchildren. We’ve always been collectors.

I found out about DRA through a Council Bushfire Recovery Newsletter that comes once a month. I rang the Council and when I registered they said I was number 141 and that it would take a few months before someone contacted us. One week later DRA came out to see us.

DRA has been fantastic. You can see the amount of clearing that’s gone on. It just got out of hand with all the rain we had. So they have done a great job of clearing and cutting down trees and clearing along the fence line, ready for us to put fences in. They have also helped us by moving a lot of pots and other things that we couldn’t do. It has saved us a lot of time and money and there is now light at the end of the tunnel.