Get Amongst us – Veteran, Guy Sadler 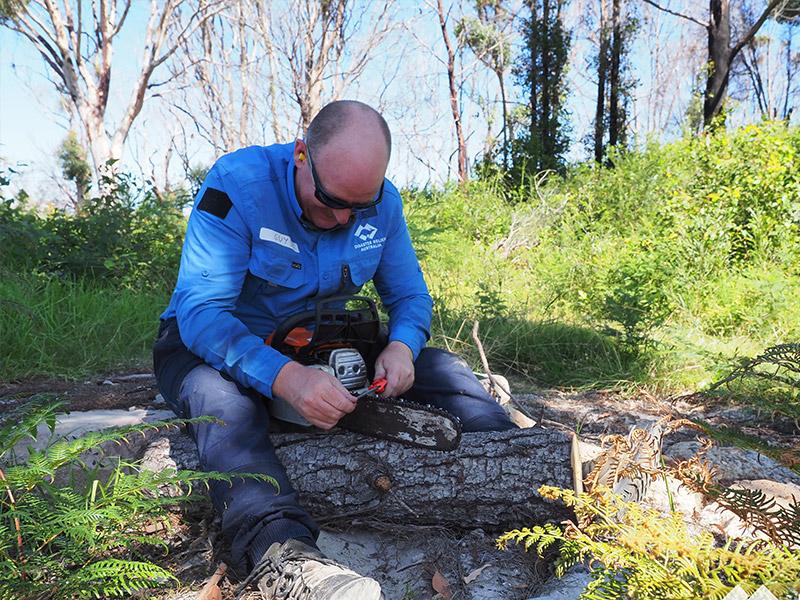 I started my Military career in the Navy as a Marine Technician. The trade I got was a Fitter Machinist and Boilermaker Qualifications. I did that for 6 years and worked on minor fleet, patrol boat and landing craft. I then did a bit of a stint on ‘waries’, bigger, combat oriented platforms. I then discharged and went into the Reserve Navy.

In the meantime, I became a Prison Officer as my primary role. I then went to the RFS as an Operations Officer. I am now the Operations Training Officer at the Dubbo Training Academy. I have been there for four years and during this time I was involved in remote firefighting, and search and rescue coordination. I also studied Emergency Management and Emergency Management Leadership skills at Uni. This is where I first heard about the role of NGO’s. I wanted to find out more about what DRA did so I researched online and made some calls. I found out that a few of my ex-defence community had joined DRA.

I had always been a Government worker. I had learnt Emergency Management and the skills of preparedness, response and recovery and I realised there was a gap in there. I knew that my skills and qualifications could work in DRA so I gave it a go. What I didn’t realise was that being in DRA was ‘like coming home’. As a defence member, when you leave, you lose a bit of that family, that understanding that civilians or the rest of the community don’t understand. Some of the returned services type arrangements treat you like you are broken.

What I like about DRA is that you are not treated like you are broken. We are here, we do a job, we do an awesome job, we support each other. We work with civilians, first responders, everyone!

I get really excited when I get picked for an Operation. I know my wave, I start contacting people who I know and we keep in contact. We work hard, play hard and we have a ball. I go home happy because I’ve helped the community which is a good thing. I’m continuing to use my Emergency Management skills and training in the recovery space and I get to come and ‘play with some mates’.

During this Operation my role has been as Strike Team Leader and I find my skills are utilised well here. My role is getting briefs and giving briefs and making sure everyone in the Team and otherwise is safe. I also have a role in speaking to the landowners and other people outside DRA that we are exposed to and that we come across during our time driving around. I really enjoy that because I can talk and I really enjoy that interaction, that community engagement type role is something I can do and I feel safe and secure in doing that.

I’ve had some really good experiences with DRA. One that comes to mind is on the last wave, a lady was very negative to the RFS as she felt that they had left her. Initially she was reluctant to talk to us and our initial conversation wasn’t very friendly. I listened to her and we spoke at length. Her husband who is in his 70’s and was an ex-navy navigator and during the fires his shirt had actually caught fire and she thought he was going to die. They actually lost everything except their house. She felt that they had been left behind by the Government. I was able to share some of my experiences working with the RFS. By the end we were having lunch together and she was very happy.

Three Strike Teams went to the house and there were about 15 of us working hard and cutting down lots of tall trees. These people are out in the middle of no-where, but we were able to get there and help. The lady was so happy at what we had done and her experience with DRA, that she actually wrote an email to the Command at Canberra. That was a very proud moment for myself and the team. It’s about community helping the community. We can get out there and we can make a difference. That’s why most people get involved in a service lifestyle, whether it’s the Military or First Responders it;s because they like to serve. They do stuff that most people don’t like to do and DRA is just a follow on from that. Then there’s the mateship and the laughs.

If someone was thinking of joining DRA I would encourage them to do so. If you’re apprehensive, don’t be. Get in there, have a chat and find out what we’re about. Whether you’re a veteran or a first responder or even a community member who’s struggling, get out there, get amongst us. We are here to help. We will talk to you, have a joke with you, but that’s because we like you, we’re here to help. I’ve been in some other volunteer organisations and it’s all about whose chest is bigger. DRA is not like that. We are here to get a job done but we also have fun. Word of warning, you will get sweaty and dirty but that’s all part of the fun. It’s really great to be a part of the DRA family.