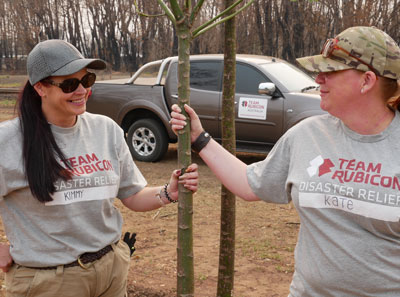 In October 2019 I was asked to join an operation reconnaissance trip (ORT) to Casino NSW with Team Rubicon Australia (TRA) regarding the firestorm that had hit Rappville in the first week of October. I had no idea what an ORT was but when I was told it was near Casino in the Northern Rivers area I said yes straight away. That area is special to me as my Mum was born and raised there. My Aunt and cousins still live in the area. Sadly, my cousin lost her place after we left when the fires flared back up. This added yet another level of emotion for me. I spent many a school holiday in the area. It is a special place for me because it is where my good childhood memories come from.

It was during the ORT that I met Connie, a Rappville local lady with a huge heart. A week later I was leading the advanced echelon (ADVON) and making sure everything was good to go for Operation Bugden to kick off. ADVON added another catch up with Connie for more information gathering. There is always a ‘Connie’ on every op. One person or couple from a disaster hit town who becomes a focal point for information.

Whilst I was on these trips, I noticed that Rappville had lost three trees from their avenue of honour during the firestorm. This was a memorial to their WW1 soldiers. As a veteran led organisation, I thought TRA should help replace the trees and Remembrance Day was just around the corner. TRA held a tree planting ceremony back at Rappville after Operation Bugden had finished. On Remembrance Day nine TRA volunteers returned to Casino. We attended the Casino 11 o’clock service. At 3pm we had a full service, and wreath laying, as well as a tree planting ceremony with the Mayor, townspeople, and the school children planting the replacement trees alongside TRA volunteers. It was a very emotional day. I cannot express how good it felt to be able to give the trees to the community and somewhat return to them a significant part of their history.

Since October of 2019 Connie and I have kept in regular contact, touching base to see how the recovery is going and developing a friendship along the way. In January 2020, my group drove the long way home from Operation Partridge (Willawarrin NSW) just to be able to have lunch with Connie and her family. Yet again there were eight TRA volunteers in Rappville. We checked on the trees, watered, and fertilised them whilst also checking on a special family plus a quick stop in the pub to say hi to locals we knew and see Clayton the publican.  This trip there were huge hugs and tears for Connie and me when it was time to go. We have become like sisters and can talk for hours on the phone.

It is now June 2020. Team Rubicon Australia has rebranded to Disaster Relief Australia (DRA). Same people, same mission, different name. Connie put a call out in May saying that farmers affected by the firestorm back in October needed warm clothing. They received some second-hand jumpers but I wanted to do more, so I put the call out to our tribe of volunteers for help to buy them something new that was their own and had never been anyone else’s. Disaster survivors often end up with a tonne of hand me downs and something new is extra special. One of our DRA tribe helped us out with a discount from Ringer’s Western and we purchased 11 brand new jumpers paid for not by the organisation but by volunteers donations because once we have been to a town for a recovery effort we never forget them. They have a place in our hearts forever and if they ever need us again, big, or small, we will do what we can to help. Personally, for me, I will never be able to drive south without going the long way and checking in on the trees, the pub and especially Connie. The strongest bonds are those forged in adversity.

I am blessed to be a member of an organisation like Disaster Relief Australia that allows me to have a purpose and be able to help people on their worst day but also never forgets the people they have helped. Not only that, an organisation that has given me back my voice and listens when I speak. When I joined TRA I was a broken person, lost in a dark world. Now I have belief in myself again and am not afraid to speak my truth. Without Disaster Relief Australia I would not be who I am today.