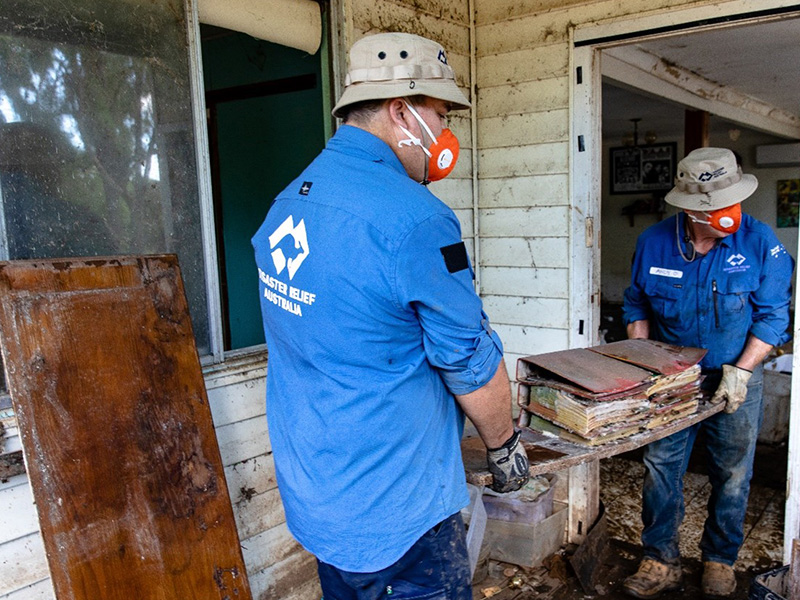 I come from a military family. My father is an Officer in the Army Reserve and so I spent much time in my childhood surrounded by the ADF community. Whether through attending a family barbeque in Keswick Barracks or doing my homework on my dad’s Army Reserve office couch, the values were always around me. My father’s suggestion to become a volunteer for Disaster Relief Australia was enticing. He was already a volunteer and he explained to me the values and mission of Disaster Relief. It was perfect, my dad was giving me the opportunity to both experience new things and genuinely help out.

Immediately I signed up and was extremely fortunate to be chosen to be a volunteer in Operation Kelliher. The catastrophic floods in New South Wales and Queensland were all over the news and so it was clear that if there were any place that needed help, it was those local communities. Within a week I was sent to NSW, specifically to a small town called Coraki.

Coraki was absolutely devastated. Almost every house was flooded inside and out and its residents were shellshocked. It would have been overwhelming for me, but once inside the base of operations at the Coraki Golf Club I felt that I could get through it. It was clear that the operation was well organised and that I could play my relatively small part and trust that if I needed support it was there.

I was part of the second wave, so we missed the flood itself but were essentially the first group to deal with the rehabilitation of the community. With my assigned group, two veterans and one civilian, we began to drive out to locals who specifically asked Disaster Relief for help. The first house we visited was a farm owned by a couple in their 80s whose entire livestock and first floor of their house were destroyed. It was clear then that our service was as much about mental help as it was physical help. The couple were dejected and knew their livelihoods were taken away from them. We cleared up their shed and fences, making considerable progress before leaving at the end of the day.

The second day saw us visiting a house containing a huge amount of items that when finally piled up outside their house for a garbage truck to remove, were enormous. Removing cupboards, beds, furniture, cutlery, and everything else was a huge task that taxed my physical strength and resilience. The house was owned by a couple that had a different perspective on their predicament. They seemed almost happy to have the house cleared out so that they can start again even though the majority of what was inside of their house had to be thrown out. Speaking to both couples gave me a good perspective on my role as a volunteer. I could not impose my feelings on them. Except for providing support, I could not tell them how to feel or what to do; my job was to help them if they asked and do that job as best as I could.

Whereas externally, I was a friendly helper to the locals, among the Disaster Relief volunteers, I found a wonderful and supportive community. The balance between veterans and civilians allowed me the opportunity to meet and get advice from different people from different parts of Australia. The veterans told me their history and often traumatic experiences in the field of war and the civilians told stories about their lives both of which gave me perspective on my own. After a week of hard yakka, I was fully bonded with them and felt I had made firm friends that I would keep outside of Disaster Relief.

Coming back from Coraki after 7 days of work and 2 days of travel I was a changed man. I had gone through an experience unlike any other that gave me perspective on my life and the opportunity to genuinely help people in need. Speaking to my father afterwards, I began to understand, in a small way, what he went through as an Army Officer, which strengthened our relationship.

I advise any person reading this who is a civilian not to be intimidated by the veterans that are the core of the organisation. They will support you through the operations and respect you for the service you do. There is no other organisation that I know of that provides such an experience, so take a leap of faith, sign up and get going!